As a recommendation from a coworker, I picked up Team Topologies by Matthew Skelton and Manuel Pais. The topic of team organization is on my mind because my employer, Doctor On Demand, recently merged with Grand Rounds Health. Our engineering teams are coming together, and the process is bringing about a lot of questions for merging gracefully.

I’ll share some highlights of what I think about this book. 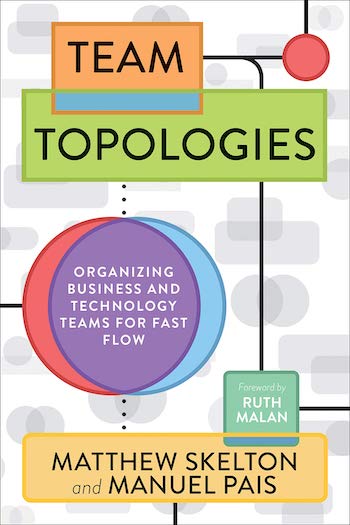 Any organization that designs a system (defined broadly) will produce a design whose structure is a copy of the organization’s communication structure.

The authors of Team Topologies suggest that we flip this law on its head. If we can make teams that map to the structure that we want our software system to be like, then we’ll succeed when Conway’s Law kicks in.

Everything else in the book seems to revolve around this central thesis. All the advice derives from trying to make your teams look like the system that you want.

In my analysis of this idea, I wrestled with a few things.

Let’s say you’re a healthcare company that’s trying to deliver better care via machine learning of patient data to produce an outcome that can be shown to patients in native mobile app and web apps. To succeed on that vision, what kind of team would you need?

That kind of team may be able to produce the desired outcome, but what is the system design that will fall out of such a grouping? Also, if you assume that you’ll need more than one of each of those categories on the same team, then you may be looking at 12 engineers on the team at minimum.

Who is the audience? How big does an organization have to be before these ideas kick in? When these other teams appear to be nearly required for a stream aligned team to succeed, something is starting to smell funny. This advice sounds more and more like it is for larger organizations. Given that the authors are both consultants, maybe that’s exactly who this book is for.

Aside from the sheer volume of engineers required to make the proposed organizational structure work, I believe there are other factors that might make this approach to team design harder.

Software is not as malleable as we think it is. It exists in a historic context that can apply backpressure to our organizational machinations.

In my recollection of some of the examples presented, it took companies years to transform into the desired output. My guess is that this is because real change is hard. Software that is working for customers might be hard to change, regardless of how much we shuffle the engineers around in an org structure.

I don’t think this means we are doomed to whatever (potentially crappy) system architecture was created during the early life of a company. My belief is that there is hope in team design by searching for interfaces. Software systems are complex. With our observational skills, we can seek the seams between different domains within the system.

Finding these system seams can help wrangle a complex system into its constituent domain pieces. From the identification of domains, we can cluster engineers on either side of an interface. By doing so, we form teams that can operate with a narrowed focus on a paricular domain.

If our goal as engineers in a company is to produce something valuable for our customers, then I think our team design will be most effective by adapting our system interfaces and allowing new teams to form as a reaction to that adaptation.

To me, this idea flows from one of the tenets of the Agile manifesto:

Responding to change over following a plan

Organizational change may stem from:

My point is that I think there is more to system design than setting the shape of teams to create a desired side effect on system structure.

Do my concerns mean that Team Topologies is a bad book? No, I don’t think so.

For a certain organizational size, there are valuable patterns described in the book. For instance, a platform team (i.e., a team with well defined interfaces into the lower level infrastructure) is a fantastic type of team to have.

Also, I don’t recall the authors stating that you can’t or shouldn’t define stream aligned teams based on a reaction to a recognized domain that emerges from the system. It would be unfair of me to ascribe to them something that they didn’t write. There is some interesting material in the book, but make sure you’re thinking broadly and not getting sucked into the template set forth.

These are my thoughts on Team Topologies. If you want to pick up a copy, you can find the book on Amazon.

How To Use Htmx In Django

How do you use htmx (the lightweight JavaScript library that uses HTML markup) in Django? This article shows how and provides an example usage.